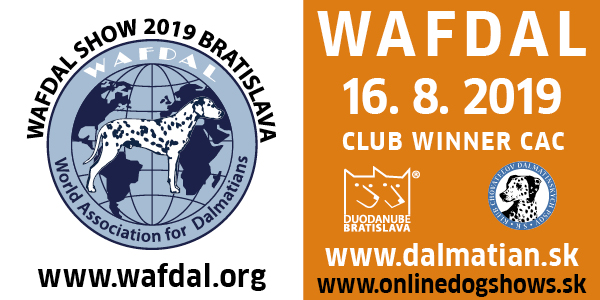 The show is held under the FCI and SKJ show regulations. Only dogs registered with the stud books recognised by the FCI can enter the show. Imported dogs of Slovak owners must be registered with the SKJ stud books. In case of a wrong class on the entry form, the dog will be automatically entered in the correct class according to his age, any dog older than 15 months will in this case be entered in the open class. Applications lacking any necessary document (a copy of the International working certiﬁcate for the working class, a copy of the Championship certiﬁcate for the champion class and a copy of a title awarding for the honorary class) will be automatically entered into the open class without notifying owners. Documents received/uploaded after the last entry closure will not be accepted.

A judge is obliged to disqualify aggressive dogs. Provoking dogs against each other is not allowed. It is forbidden to treat the coat, skin or nose with anything that alters the structure, colour or form.

Selling puppies at the exhibition grounds is strictly forbidden!

The exhibitors are responsible for safeguarding and thewelfare of the dogs at dogshows. It is forbidden to put the dog in a situation that can be dangerous for its health and welfare, such as leaving it in the car in hot or cold weather and/or treating it in a cruel manner. Violation of these rules will result in exclusion from the ongoing and future dog shows.

CAJC SR
the qualifying certificate for the Slovak Junior Champion title can be awarded to a dog and a bitch that is excellent 1st in junior class.

CAC SR
the qualifying certificate for the Slovak Champion title can be awarded to a dog and a bitch that is excellent 1st in intermediate, open, working and champion class.

Reserve CAC SR
can be awarded to a dog and a bitch that is excellent 2nd in intermediate, open, working and champion class providing that the CAC has been also awarded to the first placed in that class.

JUNIOR WAFDAL Winner (Junior BOB)
awarded to the best dog or bitch that is CAJC in Junior Class.

Best of Breed (WAFDAL BOB)
awarded to the best dog or. The CAC, CAJC and Wafdal best veteran compete for BOB. WAFDAL BOB

BEST BRACE
One owner can can enter his/her dog and bitch of the same breed that have been judged at this international show. The first three best couples are placed.

BEST BREEDER´S GROUP
A breeder can enter his/her breeder’s group of at least three dogs or bitches of the same breed, color and size, which have been judged at this show. The dogs and bitches do not have to be owned by the breeder, but they must come from the same kennel from at least two different litters, at least two different sires or dams. A dog/bitch can only be entered to one breeder´s group. Exhibitors are obliged to let their dogs/bitches compete in this competition when asked by the breeder. Entries are accepted till 13:00 in the show office. The first three breeder´s group are placed.

Every dog must have a valid PET PASSPORT in which it will be clearely stated that the dog in concern has been vaccinated against rabies, distemper, parvovirus and hepatitis at least 21 daysand at most 1 year before the date of the show, or within the validity of the given vaccination.